Well, I'm back from another Cuba trip.
I'm considering posting at least some pictures of that beautiful country, but that'll have to be another post on its own.
For now, I'll just post the sewing I've been up to since I got back home: 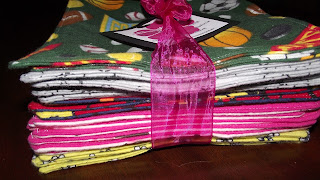 Before we left, I had an order of washcloths to fill after I got home. 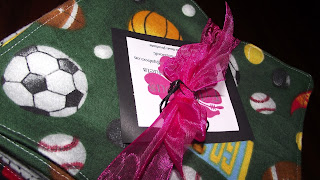 I love packaging them up all pretty. Don't worry--it's not only a stack of boy washcloths--there's plenty of girl ones in there as well so I felt it'd be alright to use a bright pink ribbon. (Can you tell I really like pink?) 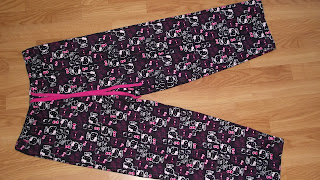 I left my PJs in Cuba. If you recall hurricane Sandy, before it ever reached the US, it had left a huge path of destruction in the Carribean? Well, we were able to help in a tiny way by leaving most of our clothes (other than what we were wearing and a pair of clothes to travel back home to the rather cold Albertan climate) with a Baptist Church in Cuba to bring to Santiago de Cuba.
So, I needed new PJs. 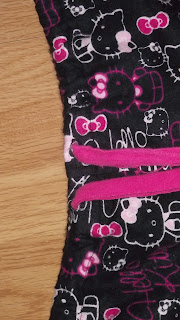 I found a Simplicity pattern online for free: #0501.
It's pretty simple. And, I didn't feel like making anything to complicated for a pair of PJs.
In fact, I deviated from the patterns instructions a bit. Instead of measuring myself before making it and shortening it with the line, I just made it and whacked 4.5 inches off the bottom later plus folded the hem up 2 inches to make it short enough. Also, the instructions said to turn the drawstring right side out after sewing it. I did not feel like turning over a metre of super skinny tubing right side out, so I just trimmed the fabric almost up to the seam and threaded it into the pants. I know, not super professional, but they're PJs. 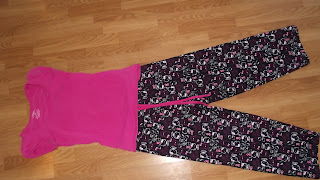 The fabric is some Hello Kitty flannel that I bought for $3 a metre. That and some pink heart fabric is the only flannel I had enough of to make these and I didn't really feel like wearing all hearts to bed.
I think I need to go fabric shopping for some grown-up fabric.
The t-shirt is an old t-shirt of mine that was actually in my 'weeded-out-of-my-closet' pile. It'll do for PJs.
So, that is what I've been up to since our return last week.
What have you been sewing in the last week?