Remember a couple of weeks ago, I had asked for some advice?
Which of these two piles I should use for a foot rest type thing?
And, overall consensus was the brown pile.
I'm glad because I really did like that pile better... 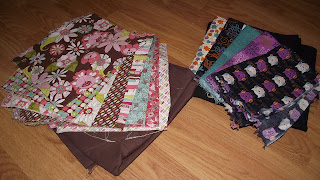 Well, it is done: 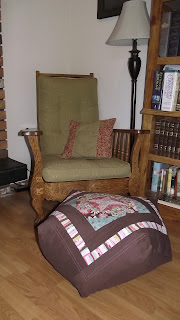 I had put it on hold a couple of times to whip other things up in the meantime--something I don't often do because I like to finish what I start. But, some pattern testing and a fun project for my boys had to be done. (I will post about those later--the pattern has not come out yet and I have to do step 2 in the boys' project. (step 1 is done completely and in use already--so not an unfinished project, just an other part of the project.)) 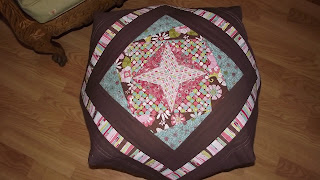 But, back to this pillow type foot rest.
The pattern or tutorial comes from the book Fabric by Fabric One Yard Wonders.
It's the Tuffet Inspired Ottoman.
And, the paper pieced star block is from Sew Happy Geek's tutorial here. I didn't use the tutorial--just the pattern. 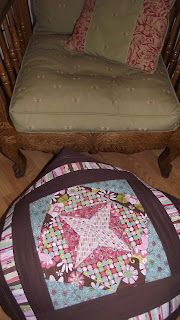 The fabrics are from Walmart so I do not know the name or designer--they were a fat quarter bundle there and the brown was about three yards of their cotton (baby bolt I think is what they call those.)
Plus, I used some pink flannel to thicken up this thin fabric by quilting it to the back.
The stuffing is three 16 oz bags of polyester fibrefill and I had a pillow with similar stuffing laying around that no body was or will be using--it is now a flat, empty pillowcase... 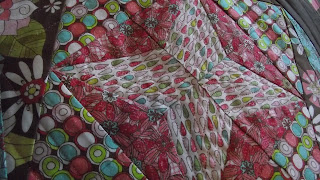 I did add a zipper to the bottom so that I could take the stuffing out if necessary and wash the cover. And, I'm glad I did--I really do not like handstitching and to handstitch a whole side closed would have been a bit much, I'd say. Plus, you can adjust the stuffing if needed--especially to keep the tuffet corners nice and stuffed. 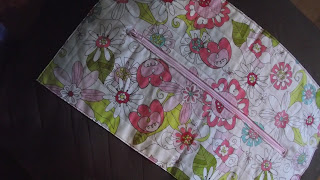 It's perfect for to throw my feet up--I think I will go do so now. 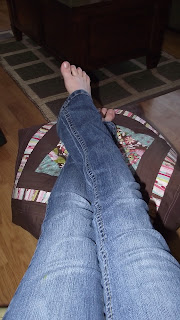