I managed to finish up two of my September goals:
(If you click on the pictures, you can read more about each of them!) 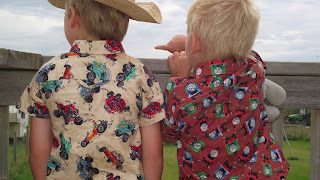 Both the button-up shirts and the war pants took a lot of time, especially making two at a time of both of them.
But, now they have some decent clothes again so they don't look like beggars when we head out.
I had to actually enforce the need to wash the pants--my younger son wore them almost three days straight. I finally had to put my foot down and tell him that they really did need to be washed.
Oh, and the left shirt--the one with the vehicles--it has been used as Lego 'instructions.' He has been trying to recreate the vehicles on there out of Lego.
Love when they really like what I sew!
Posted by fenna at 9:26 AM

Email ThisBlogThis!Share to TwitterShare to FacebookShare to Pinterest
Labels: lovely year of finishes