I recently got to test another pattern from Petite Kids Boutique!
I really enjoy testing patterns and Wong's patterns are lovely.
The pattern I tested?
The Bella Blouse:
﻿
﻿

I made two of them: 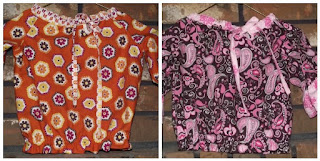 The first one--the orange one, is a modified Bella. The width for the size 3 that I made is 15" instead of 17" and the arms' width is 9.5" instead of 14". Plus, the neckband is cut at 32" instead of 38" plus the extra cut off after pinning it to the bodice.
To make up for the narrower sleeves, I cut the ruffles down to 13" instead of 19" and I did not make the casing or add the elastic as required in the pattern.
The second one--the pink/brown one, also a size 3, is the true Bella pattern. No modifications what-so-ever. 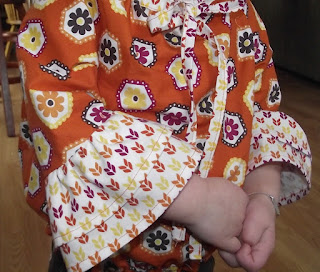 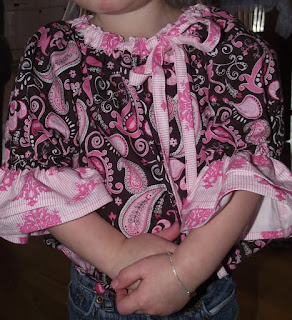 The pink/brown fabric is from Walmart. Yep, it's not as nice to work with as the nice stuff from the FQS but it does the trick.
I wasn't planning on doing two in less than a week but I'm glad they're done--they look really cute and modern.
The only problem I've found is that my daughter isn't fond of the elastic in the sleeves on the original Bella blouse--she prefers wearing the orange one for that reason. 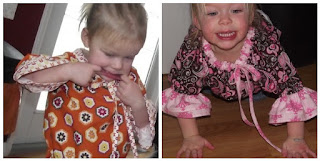 Oh, and try taking pictures of a two-and-a-half year old when she is having fun with her brothers. Sigh....