I had recently gone through my kids' wardrobes and handed down the clothes that no longer fit certain children, threw out the raggedy, stained clothing, and stored others.
In the process, I realized that my oldest son had only one sweater left.
One.
And, he wasn't impressed by that fact. 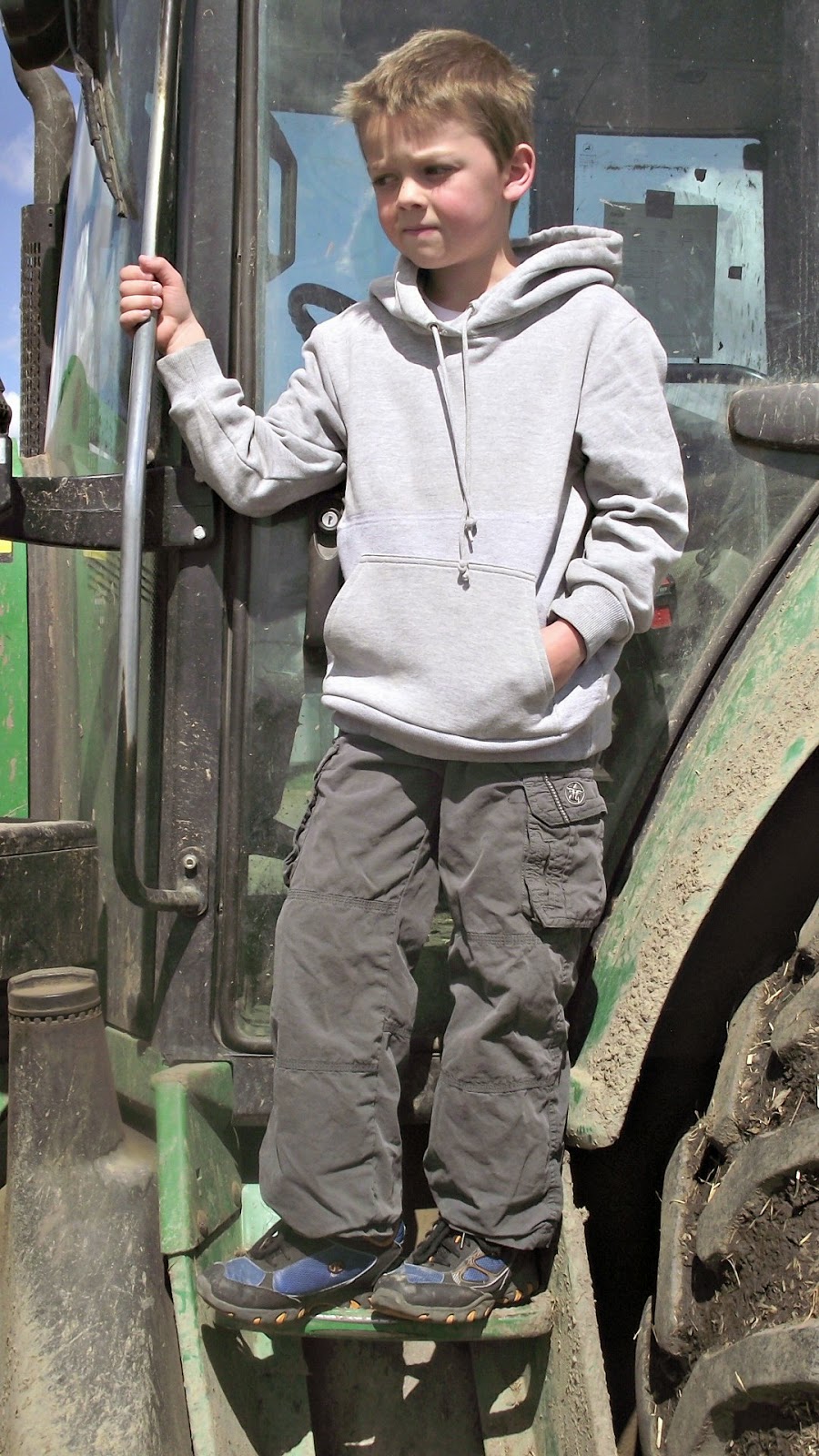 My husband I had gone through my husband's clothes some time ago and had saved some clothes that I thought could be upcycled.
A grey sweater was one of them. 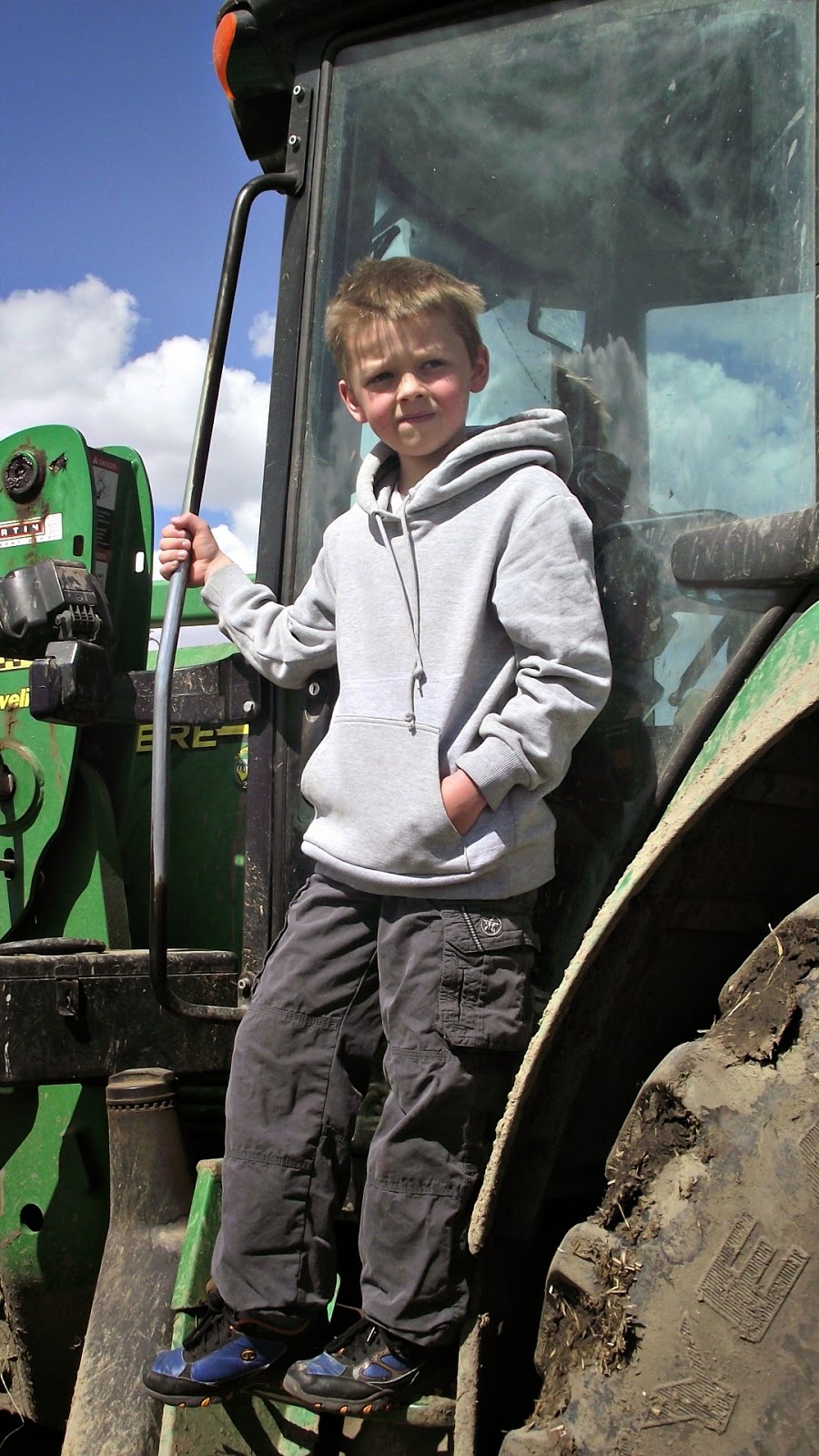 Now, to find the perfect pattern to turn my husband's large sweater into a sweater small enough for a seven year old.
I found something that I could use as a jump-off pattern in one of my Ottobre magazines--pattern #40, issue 4/2013.
The only problem was that he wanted the hoodie all in the same color.
And the pattern pieces would not fit. 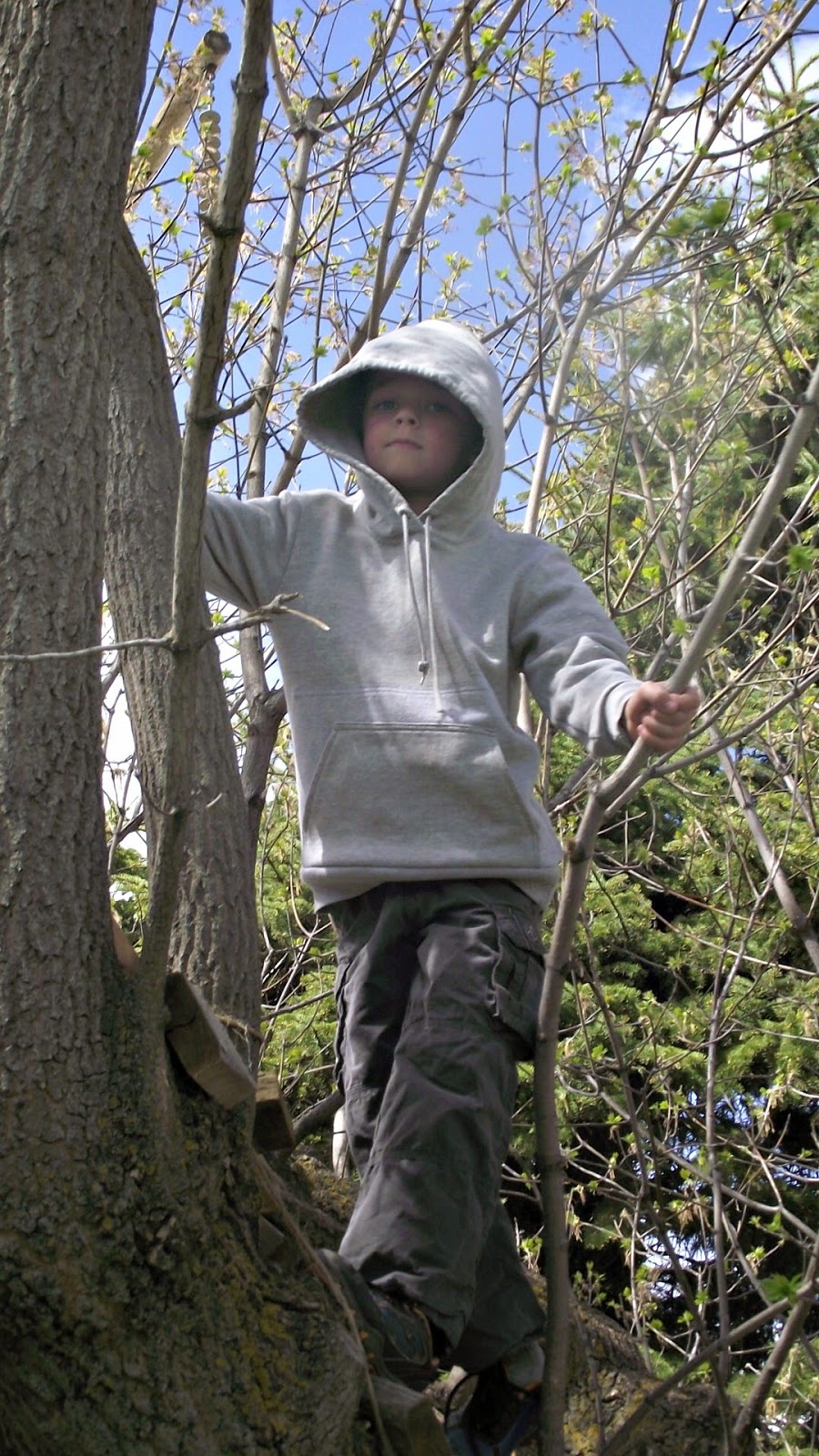 So, instead of using the hood for the pattern, I carefully seam ripped the hood off the original and re-used it as it was.
It had to be eased into the neckline as it was a bit larger than the neckline.
The pocket was also not in the pattern so I drafted my own for that as well.
(The pattern has in-seam pockets.) 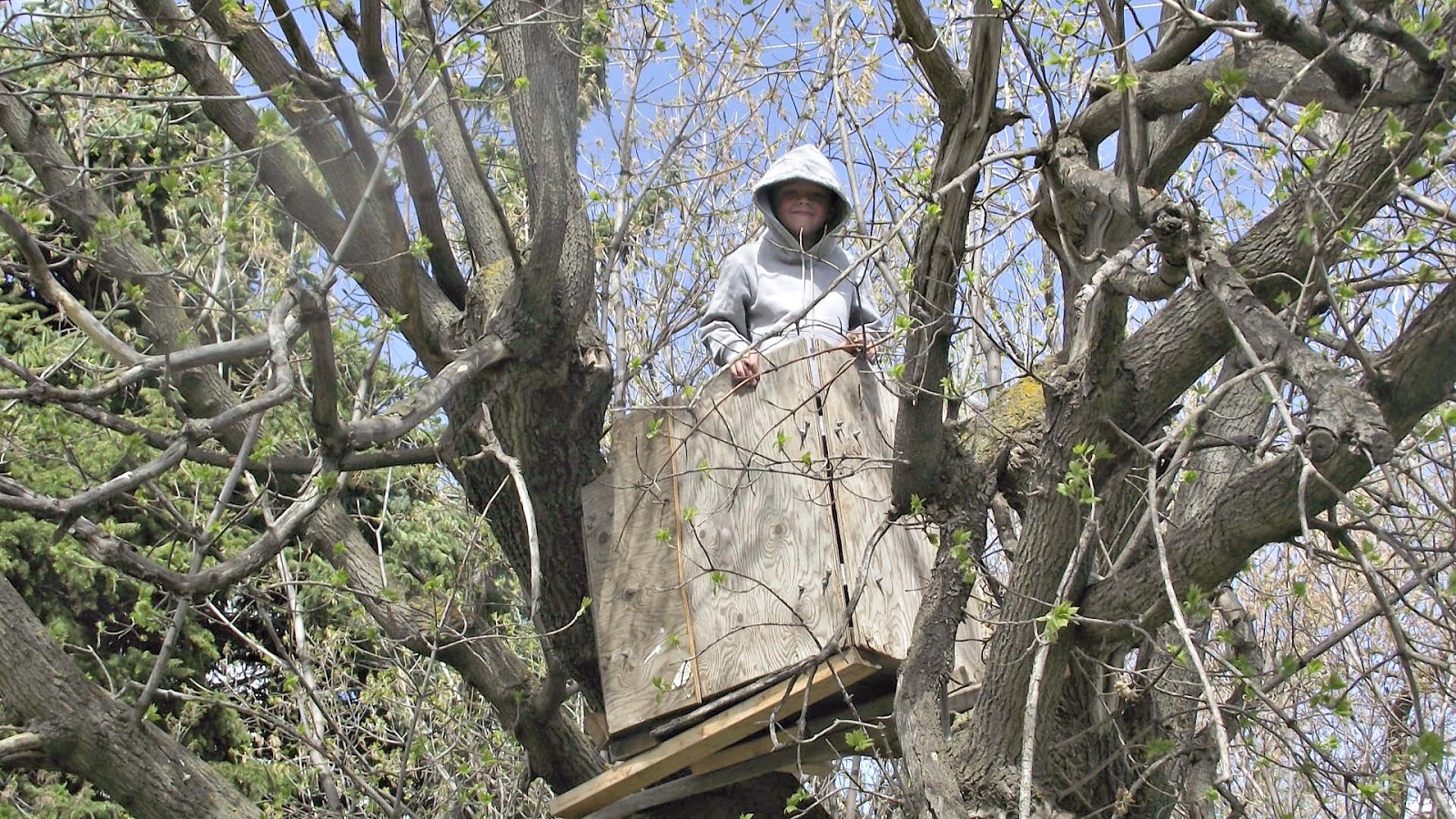 He loves it.
It's comfy especially with the super-sized hood!
And, it turned out to be relatively stylish other than the mark you can see where I took the front pocket off the original.
Posted by fenna at 2:13 PM 1 comment:

Day 6.
In a bid to get some variety in his wardrobe, I made my 3rd son a pair of sweats out of one of my husband's old sweaters.
Actually--out of the sleeves, waistband, and hood. The rest is still salvageable for another project! 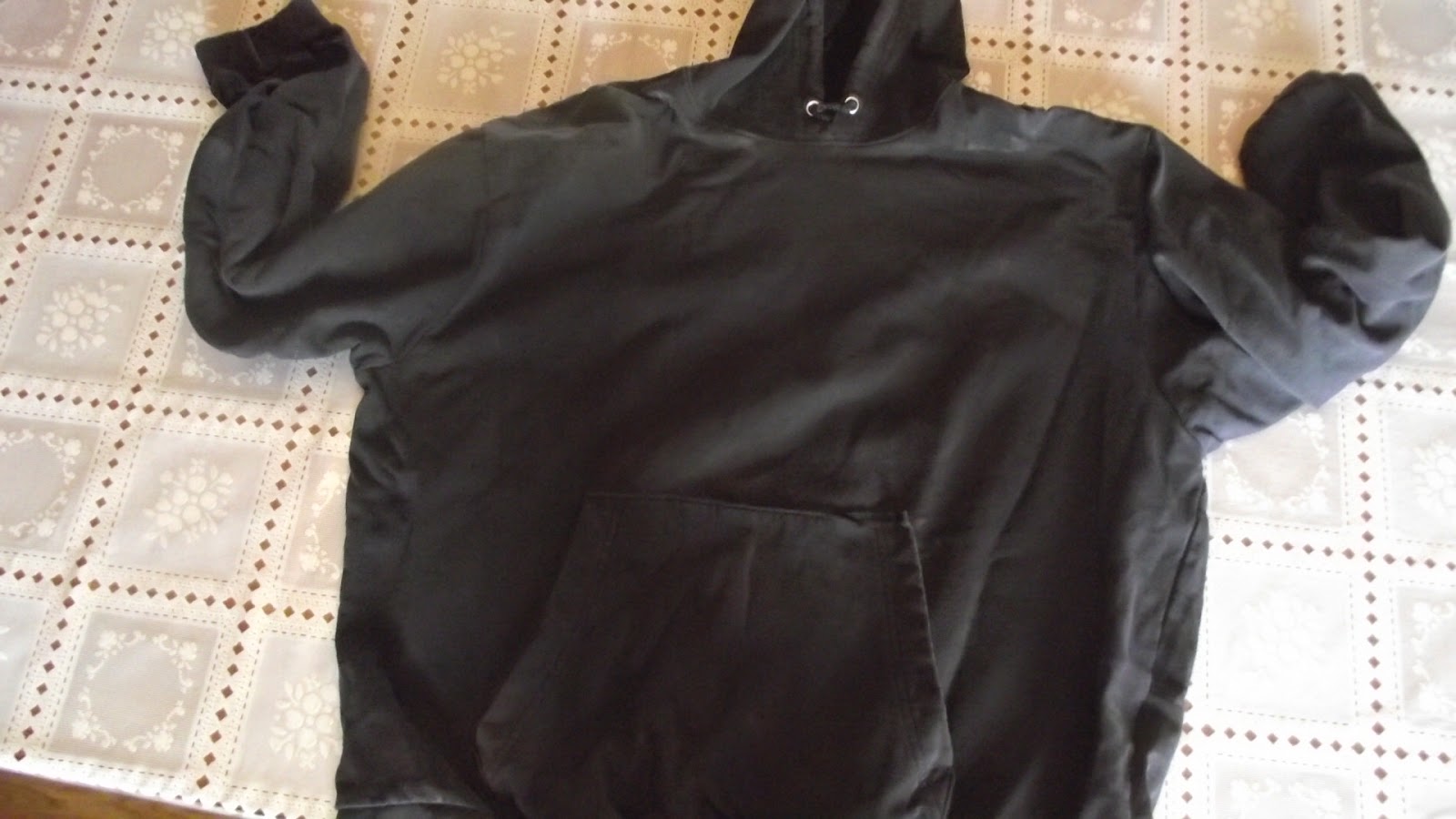 I sewed up Gracious Thread's Lazy Days Lounge Pants in a size 2.
It's perfect for the weather we're having today--snow. 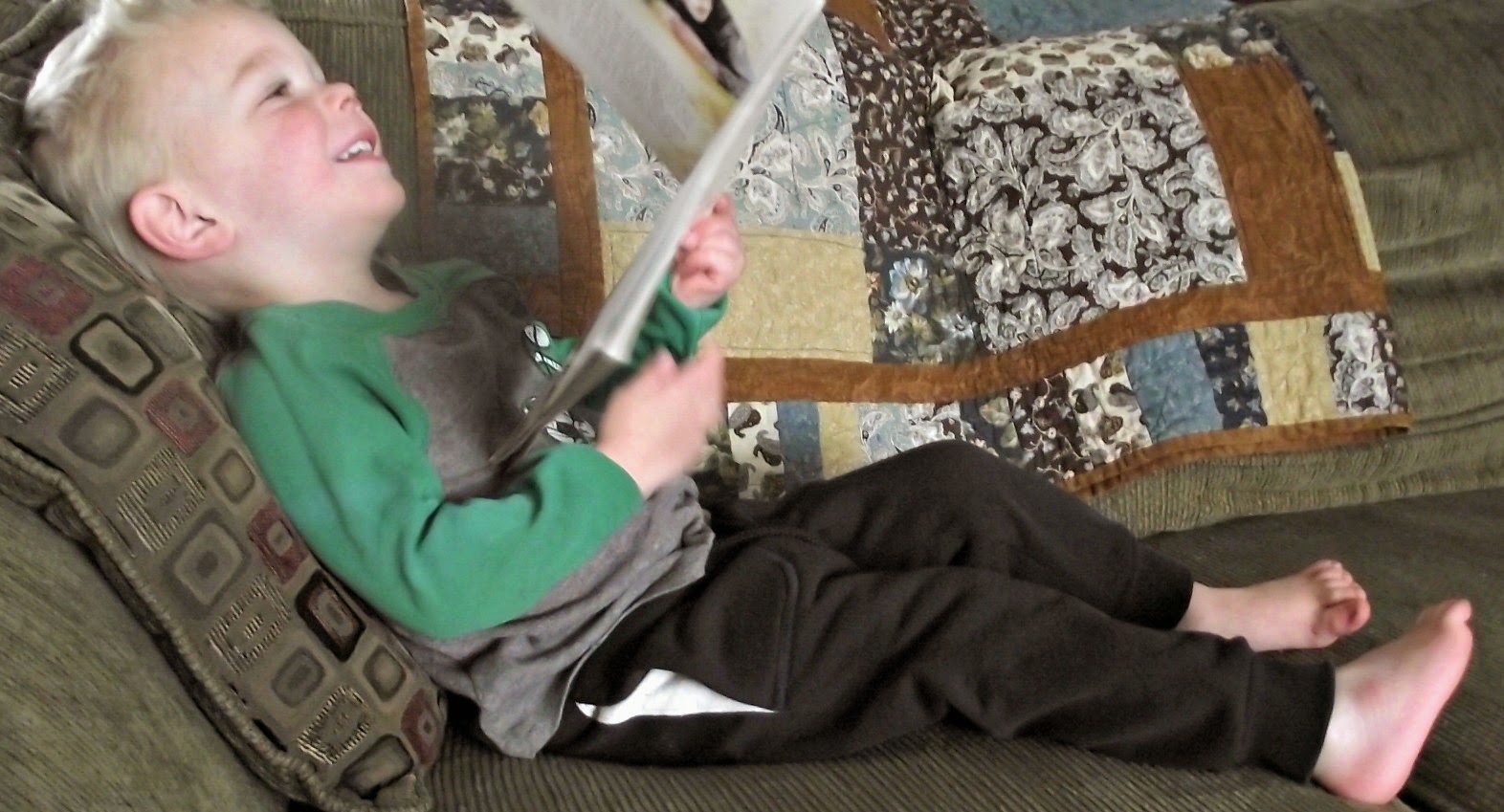 The inside of the pockets is a thin knit from one of my old tanks.
I wish I had put that on the front inside part of the pocket, not the back, but I learned a lesson for next time! 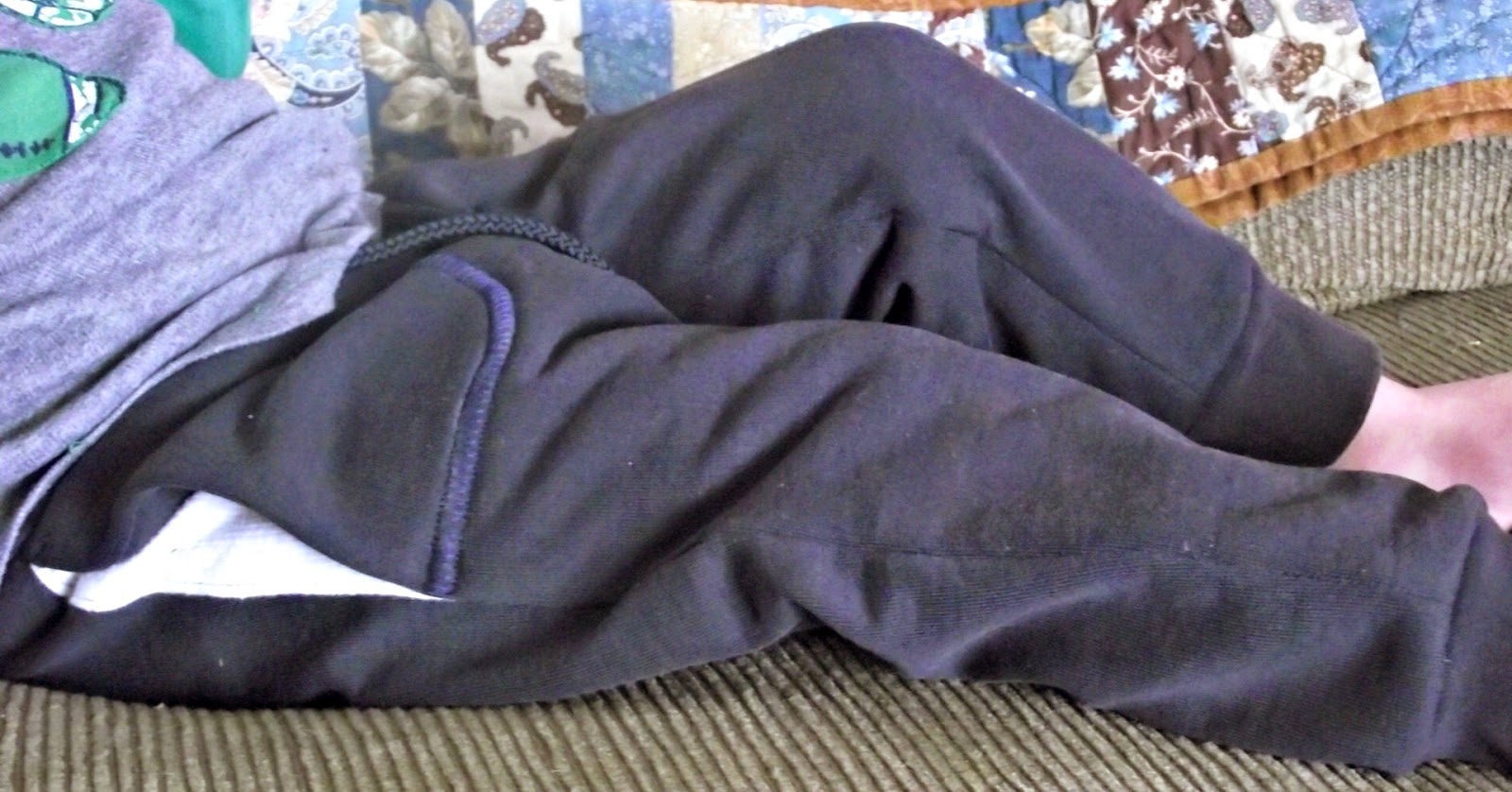 Even the drawstring is taken from the old hoodie!
I love a good upcycle.
The waistband from the hoodie became the cuffs and waistband on this.
They are a little narrower than the pattern pieces, but my son didn't need the full width anyway! 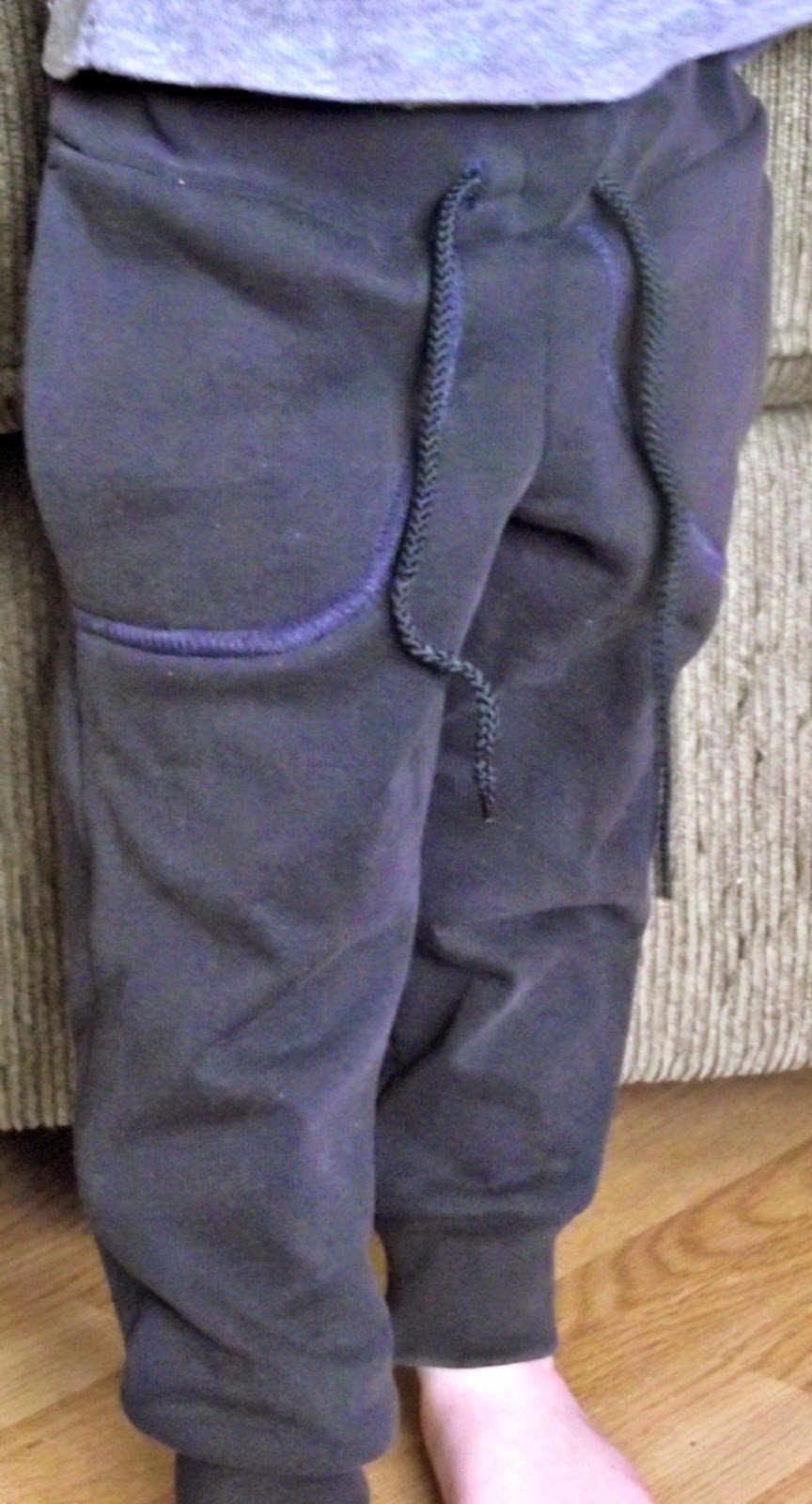 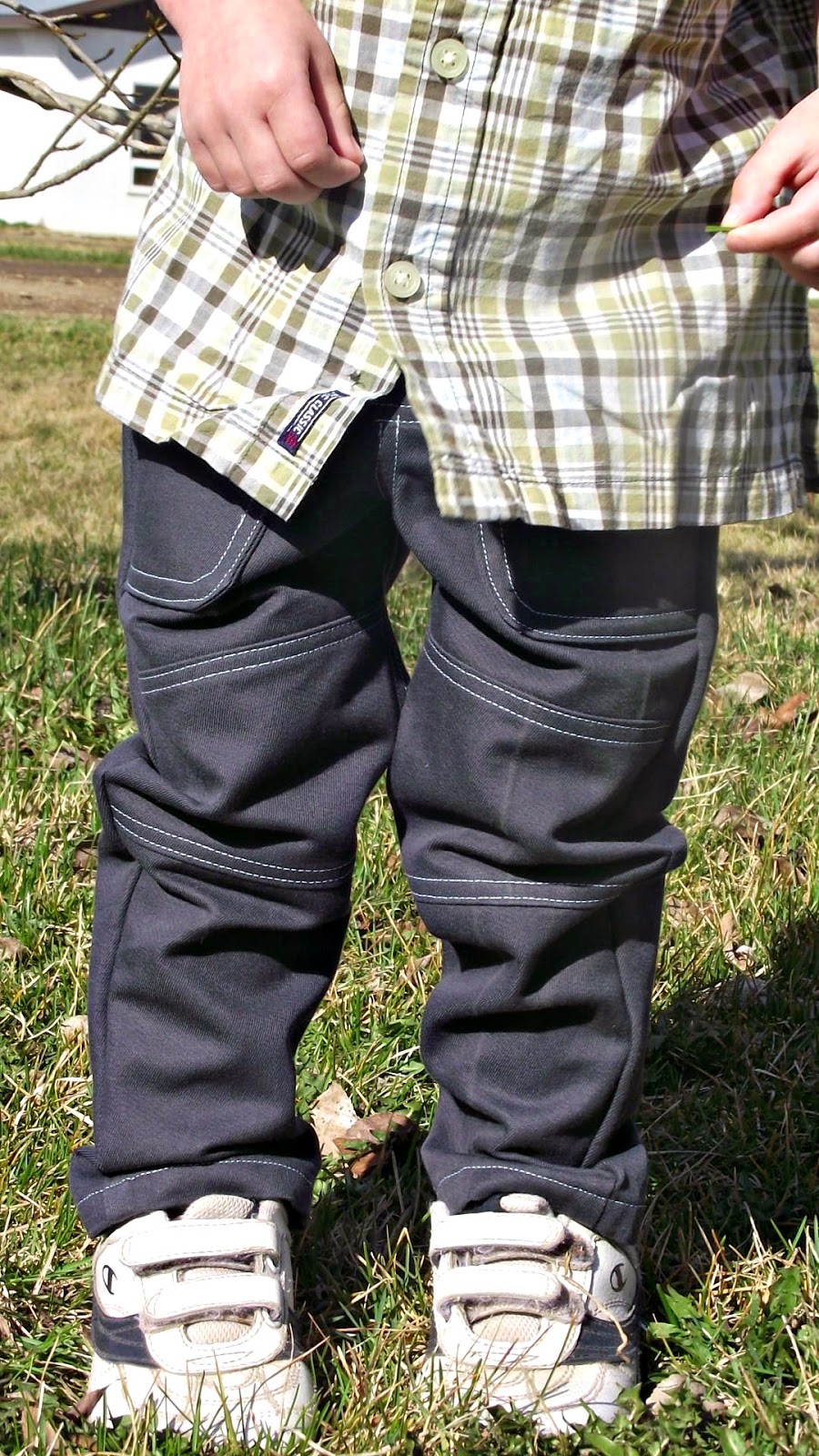 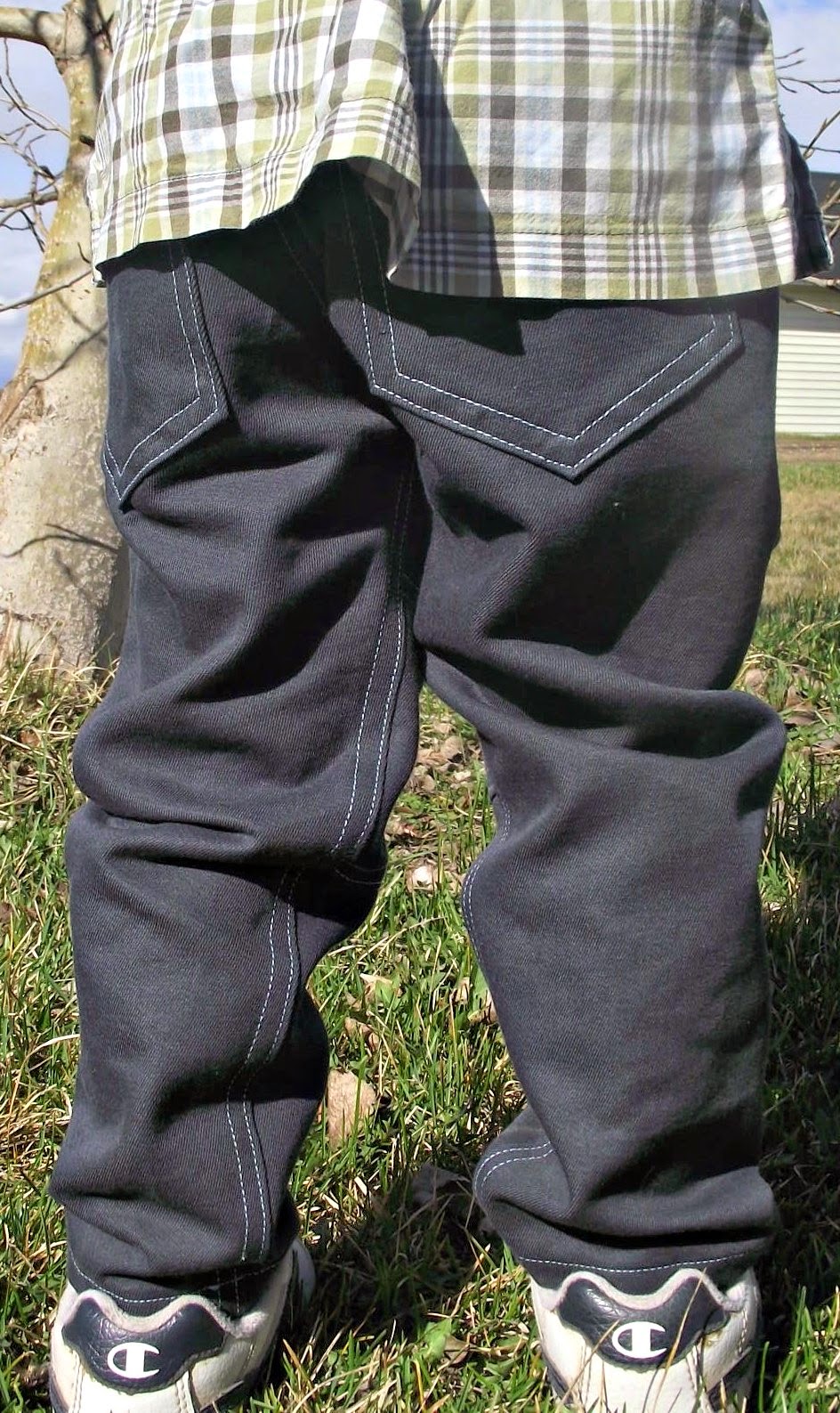 This little man is just that--little. I made the size 18 months with 2" added to the length.
To make it not sound so bad, I tagged them with a size 2 tag.
The only other modification is that I left off the back flap for the pockets.
﻿

The fabric is a denim-like fabric from our local Fabricland that I bought about a year ago.
I also used it for my diaper bag.
He's pretty happy about the pants and I'm pretty happy he has some pants that fit him again.
All of his were getting too short but he definitely could still wear them for width.
I have at least one more pair of pants planned for him--possibly two.
Posted by fenna at 6:00 PM No comments:

Days 2 to 4 !
First, I sewed up Terra's Treasures' Offbeat Oxford. (affiliate link)
I love the off-centered, curved placket!
I left off the pocket flap, but otherwise, I followed the pattern exactly.

Next up was the London Pants from Petite Kids Boutique.
I think this is around the 6th or 7th pair of these that I've sewn.
I love all the details. 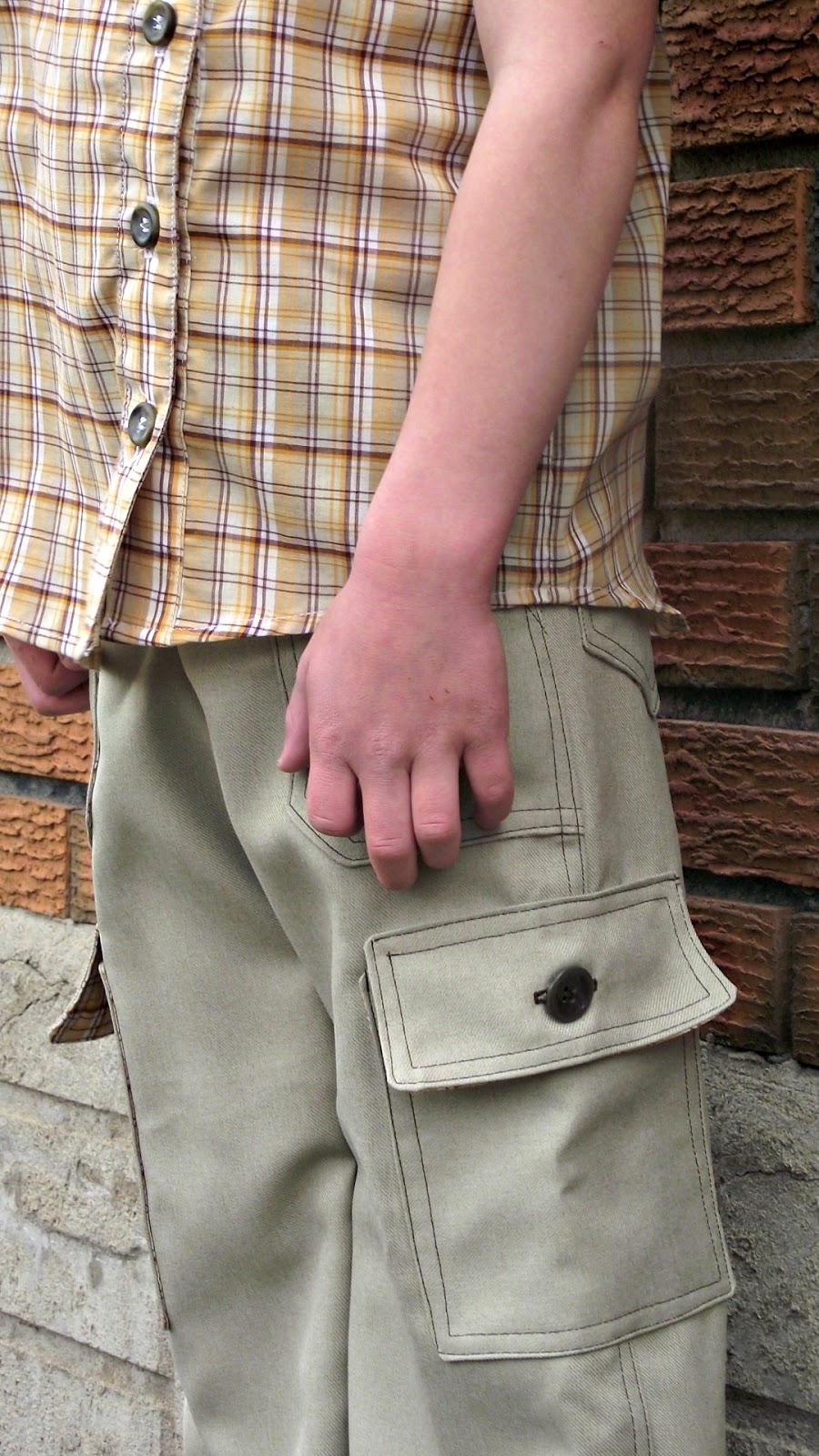 The only modifications I made on these is I left out the bottom lining and the tab. I also drafted a different pocket for the back instead of the faux tabs.

Both fabrics I received from a friend who was clearing out some of her stash.
As soon as my son saw the plaid fabric, he grabbed it and excitedly told me I could make him a Sunday shirt out of it.
How could I resist that?
Of course he needed pants to match, right?
Are you sewing along for KCW? What's on your list?
I'm working on some pants for my third son now...

After going through my kids' closets, I realized they all needed clothes.
All. of. them.
My oldest daughter really needed some new ones as a lot of her dresses were just getting too short.
So, she was first on the list.

I have sewn up a few of these Maggie Mae dresses now. (affiliate link)
And, I still love the pattern! 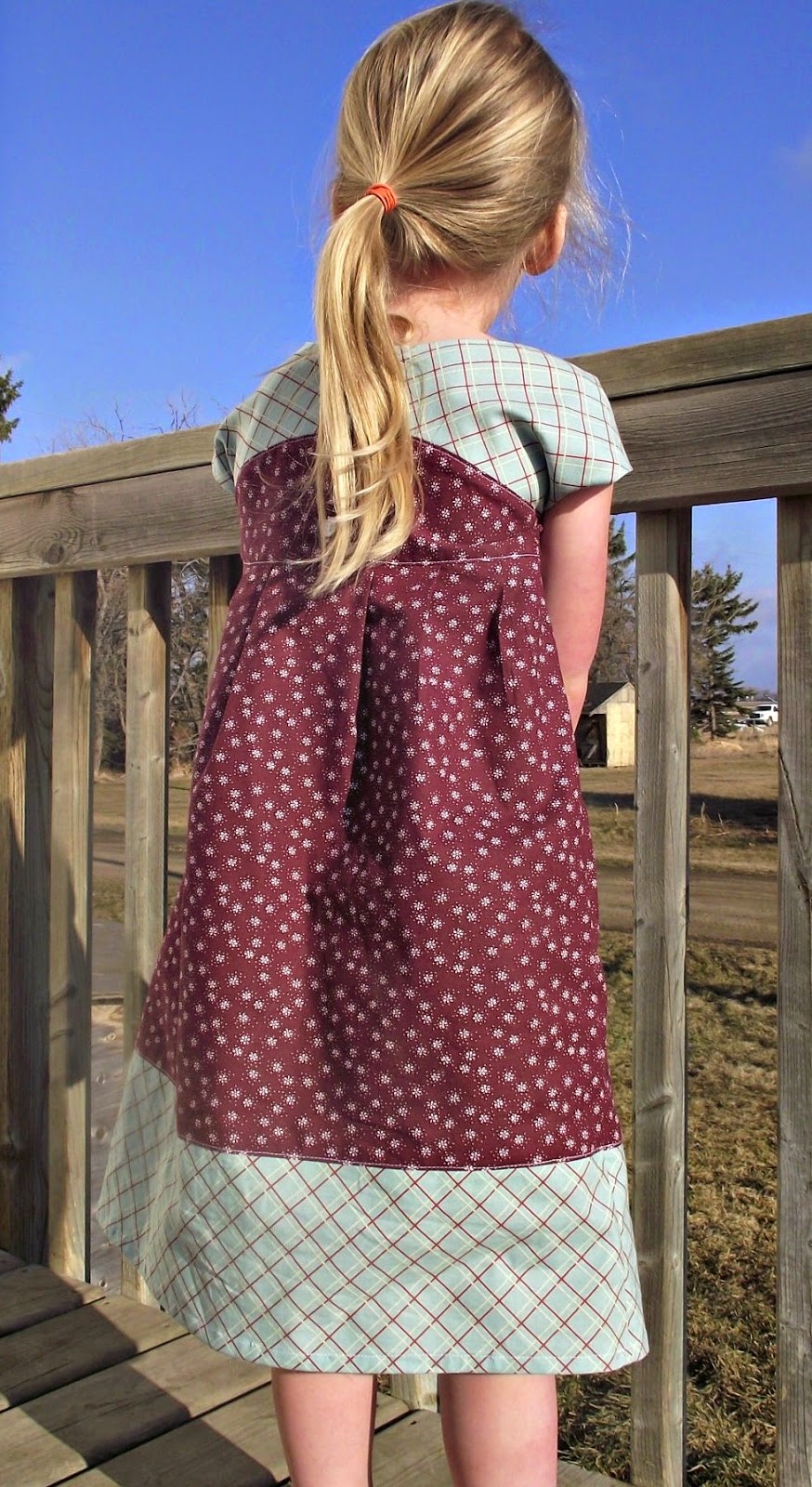 I received the brown fabric from a friend and the other fabric is from the Fat Quarter Shop, a long time ago now.
She is still a size 4 in width but I added at least three inches to the length of the main skirt (not the band) so that she wouldn't grow out of it for a little while at least! 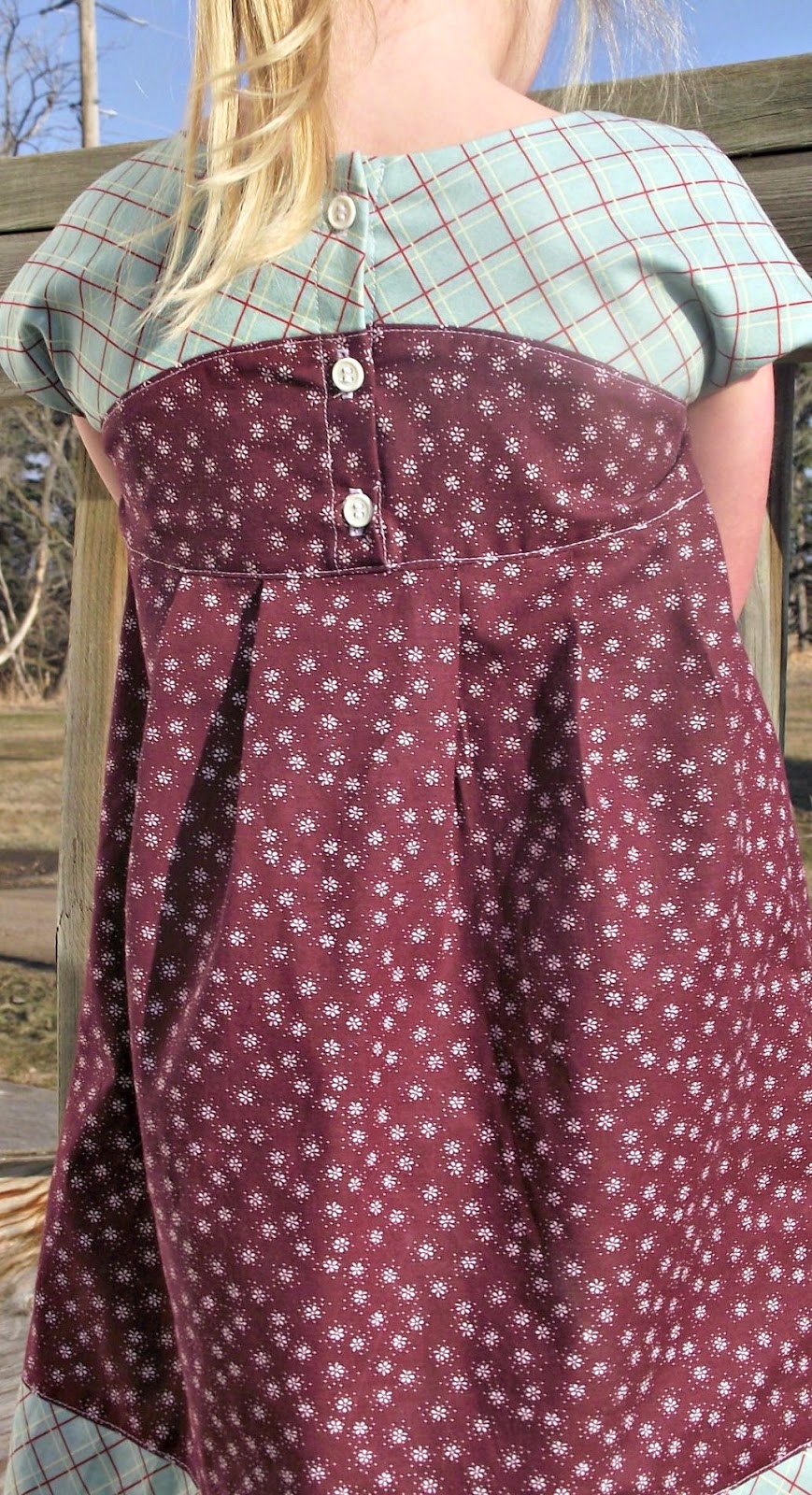 Are you sewing along with KCW?
It definitely couldn't have come at a better time for me!

The Bettie's Basket Sales & Promotions Facebook group is currently running a photo contest. If you sew anything from a Bettie designer's pattern, you should show off your hard work and submit a photo in the Facebook group! Besides the bragging right, you also have a chance to win some amazing prizes. Most Liked Photo Members of the Bettie's Basket Sales and Promotions group will vote by "liking" their favorite photos. The one that receives most "likes" will get these great prizes:
Designers' Choice The Bettie designers will huddle and vote on their favorite photo. This winner will receive:
Random Draw from Submissions
Anybody who submits a photo will have a chance too. One submission will be randomly selected to receive these great prizes. For each photo you submit, you will get a chance. So the more you submit, the better your chance!
Random Draw from Likers
Even if you haven't sewn from a Bettie designer's pattern (or have no photo to show yet), you will still get a chance to win. One "liker" will be randomly selected to win this prize:
Everyday Prizes On each day, 3 or 4 Bettie designers will be featured in the group. If you submit on that day, you will also get a chance to win a pattern from each of the featured designers of the day.

There are two ways to enter.

Who Are the Bettie Designers?

We are a group of independent designers. You can read more about the group at the Swhetty Bettie's Blog. Here's the list of designers who are part of this group:
So if you made something from patterns from these designers, definitely join us at the Bettie's Basket group. This contest is made possible by these sponsors. Be sure to check them out!

Come join the fun at the Bettie's Basket group now!
Posted by fenna at 4:18 PM No comments:

Email ThisBlogThis!Share to TwitterShare to FacebookShare to Pinterest
Labels: contest

I've had an idea to make the kids a coloring/drawing folder for long trips.
When I saw the chalkboard fabric over at Canadian National Fabric, I knew I had to give it a try! 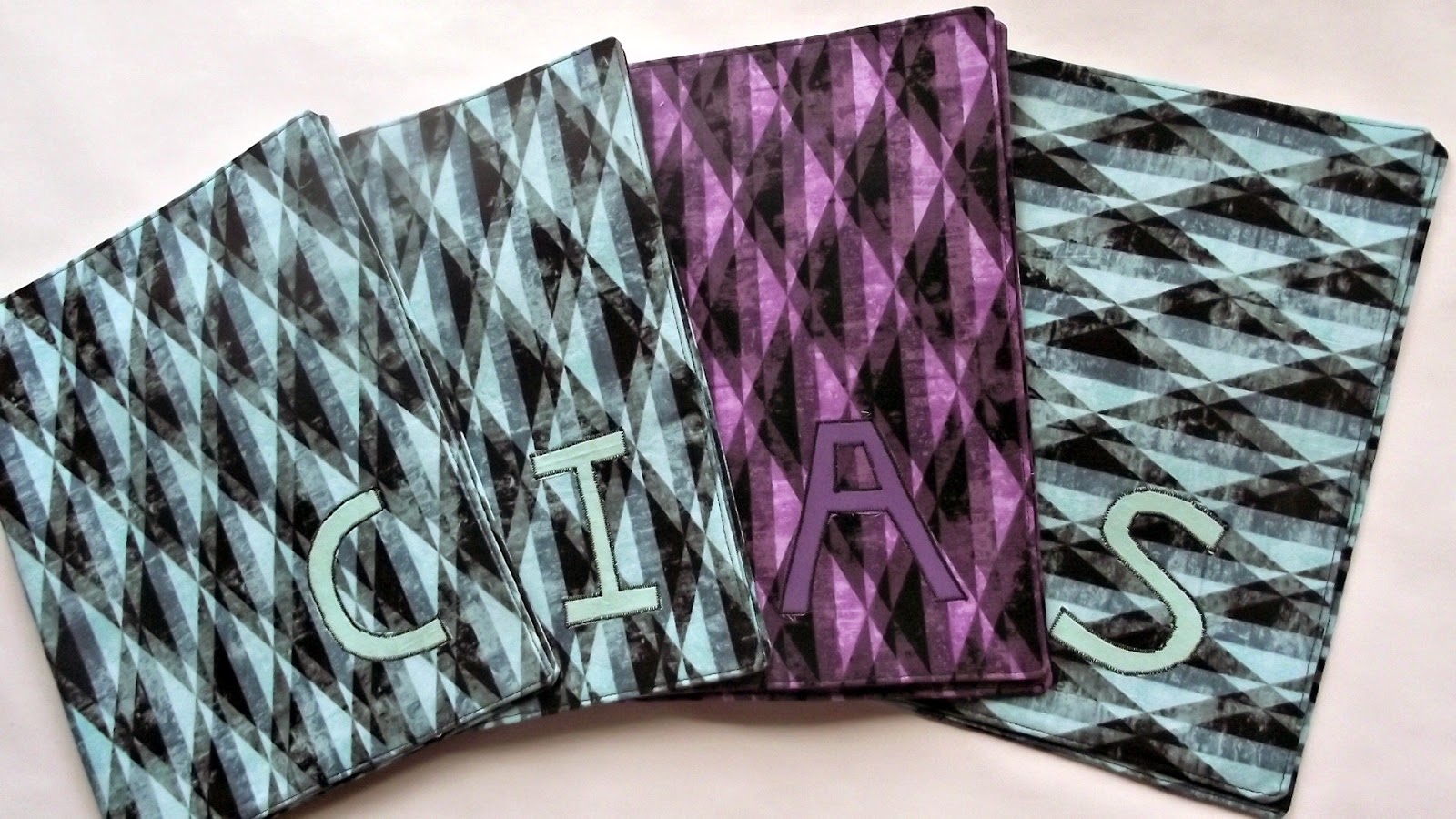 As I started to browse their awesome selection of wovens, the Wild Horses collection from Michael Miller popped out at me.
The colors would go beautifully with the black of the chalkboard fabric.
And, to add to my certainty, it came in a 'boy' color and a 'girl' color. 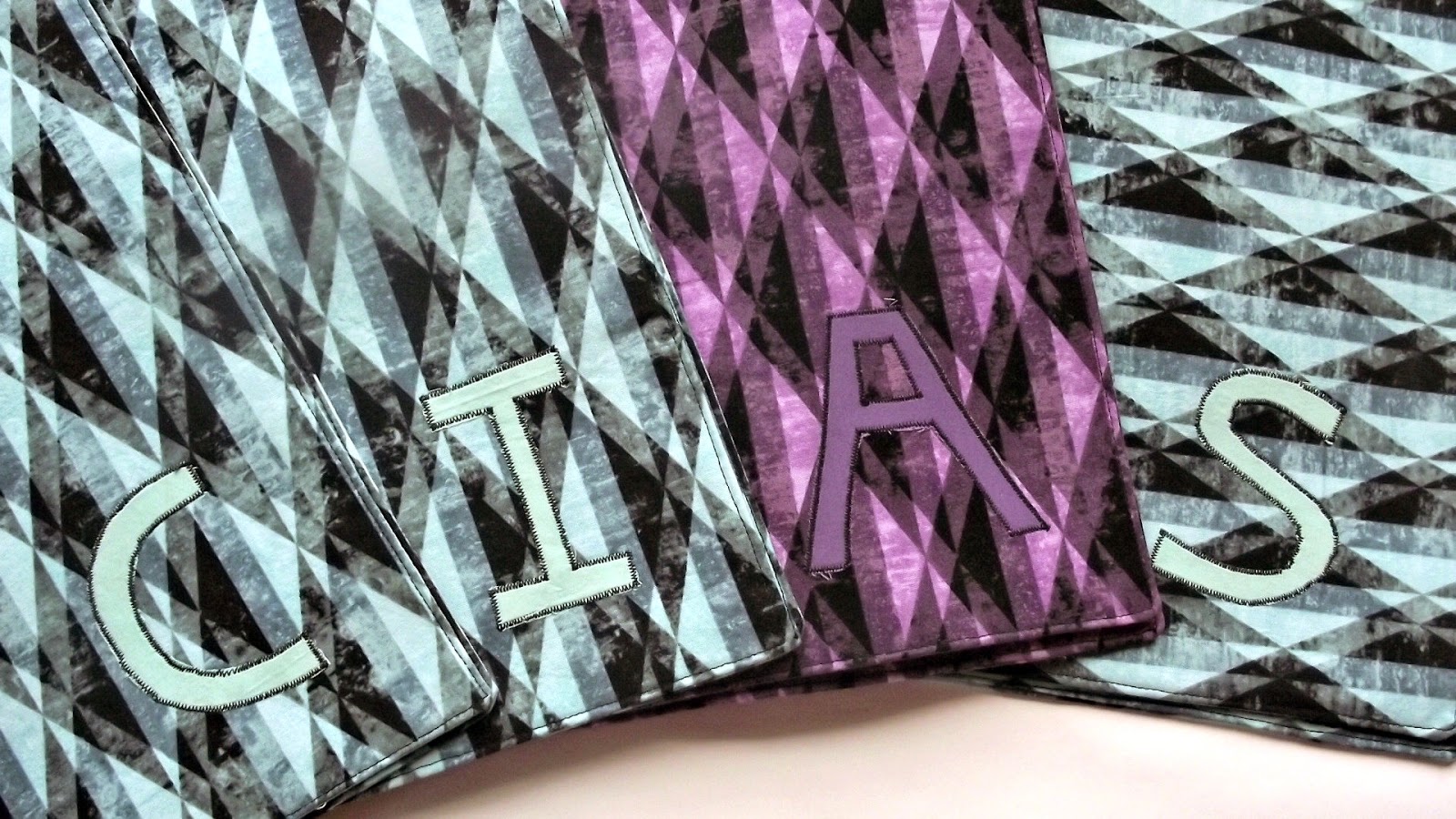 Matching solids were soon found--Art Gallery's Pure Elements in Pansy and Fresh Water.
For the record, I had chosen Verve Violet as a match, but she was kind enough to send me a better match along with it! 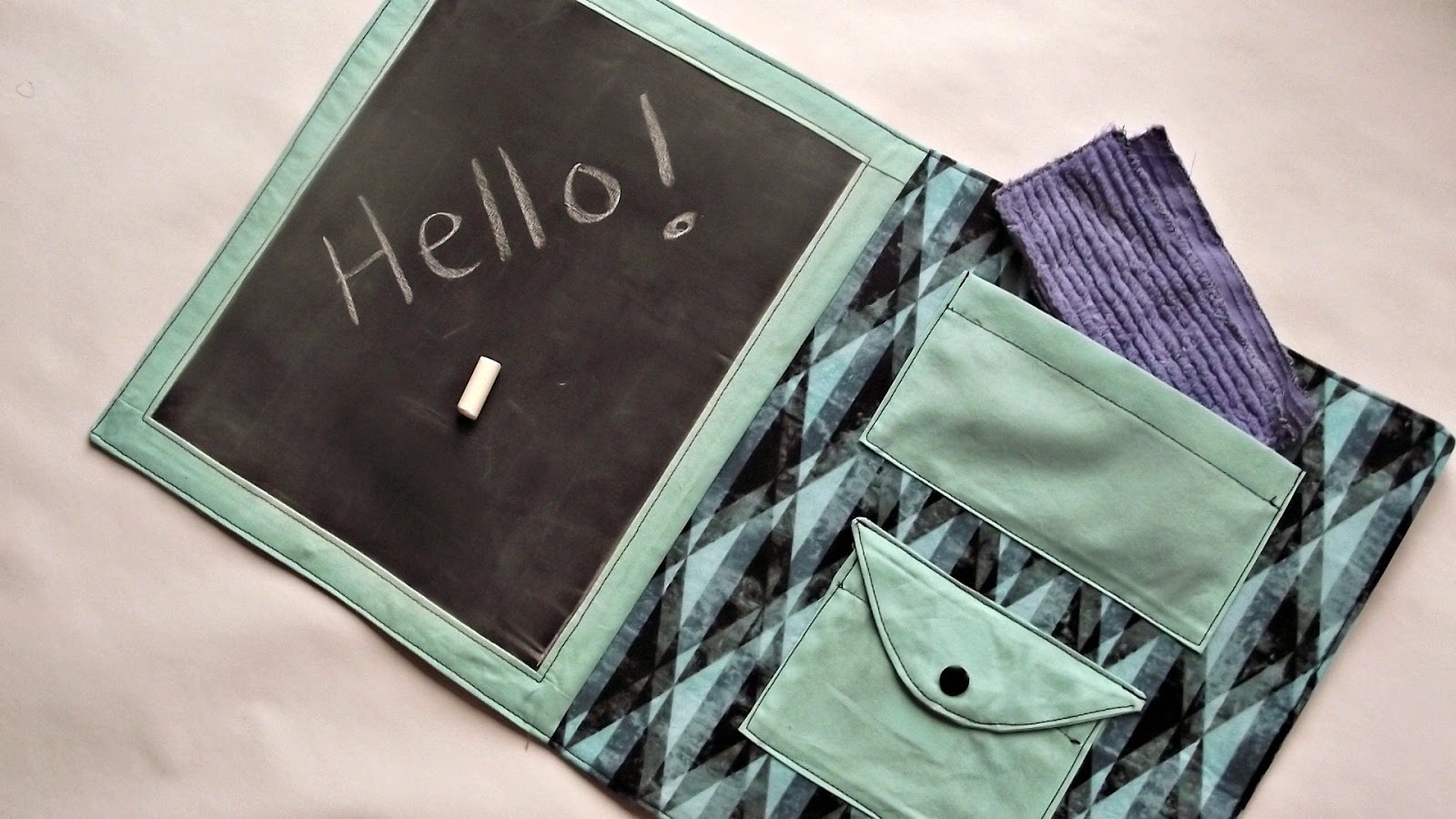 So I started making them, assembly-line style. 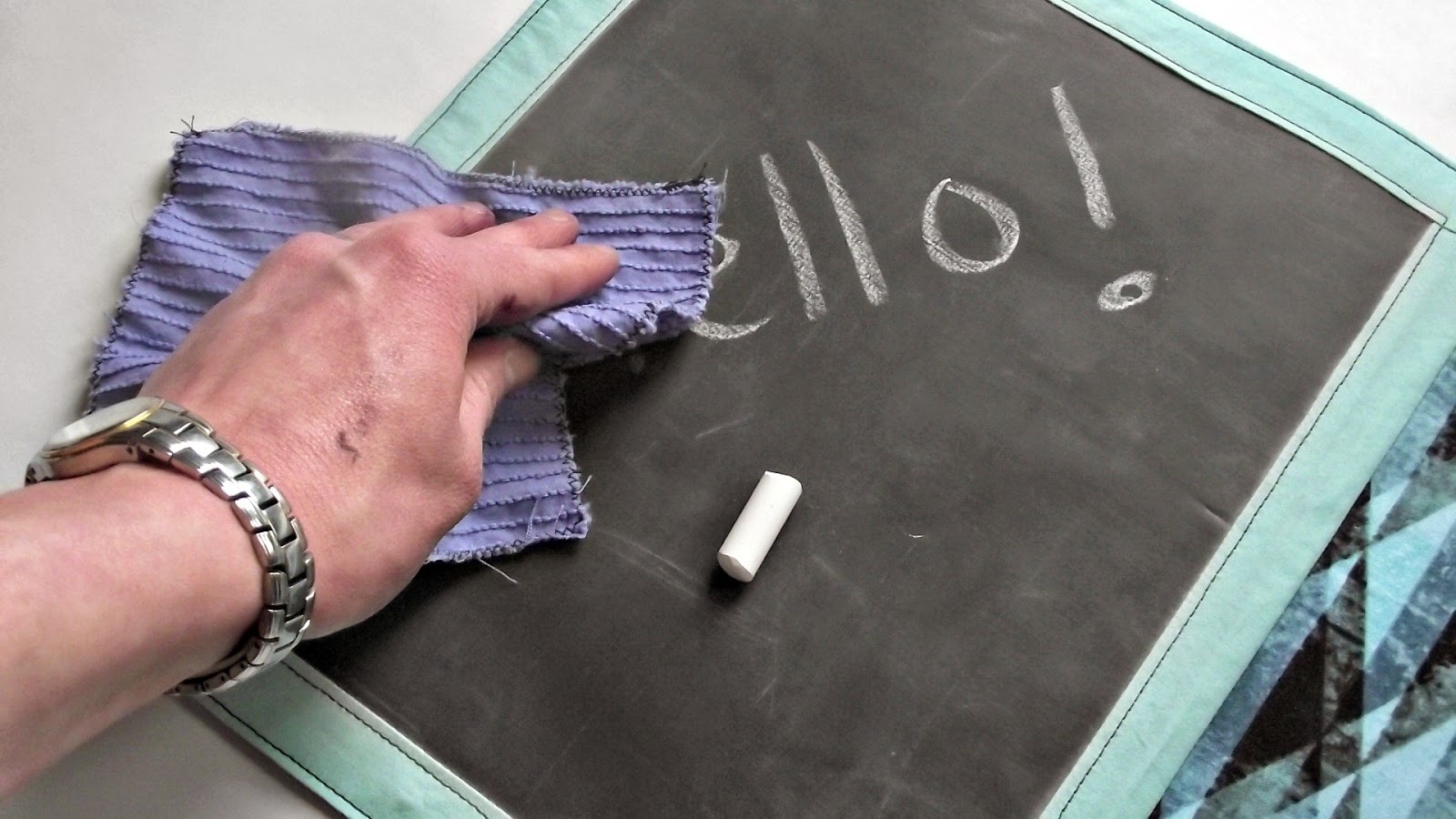 A snap pocket for the chalk.
(Yes, I know...that pocket flap sticks out a little more than intended...the drawbacks of doing assembly line style on a pattern/tutorial-in-progress!)
A pocket for the cloth. 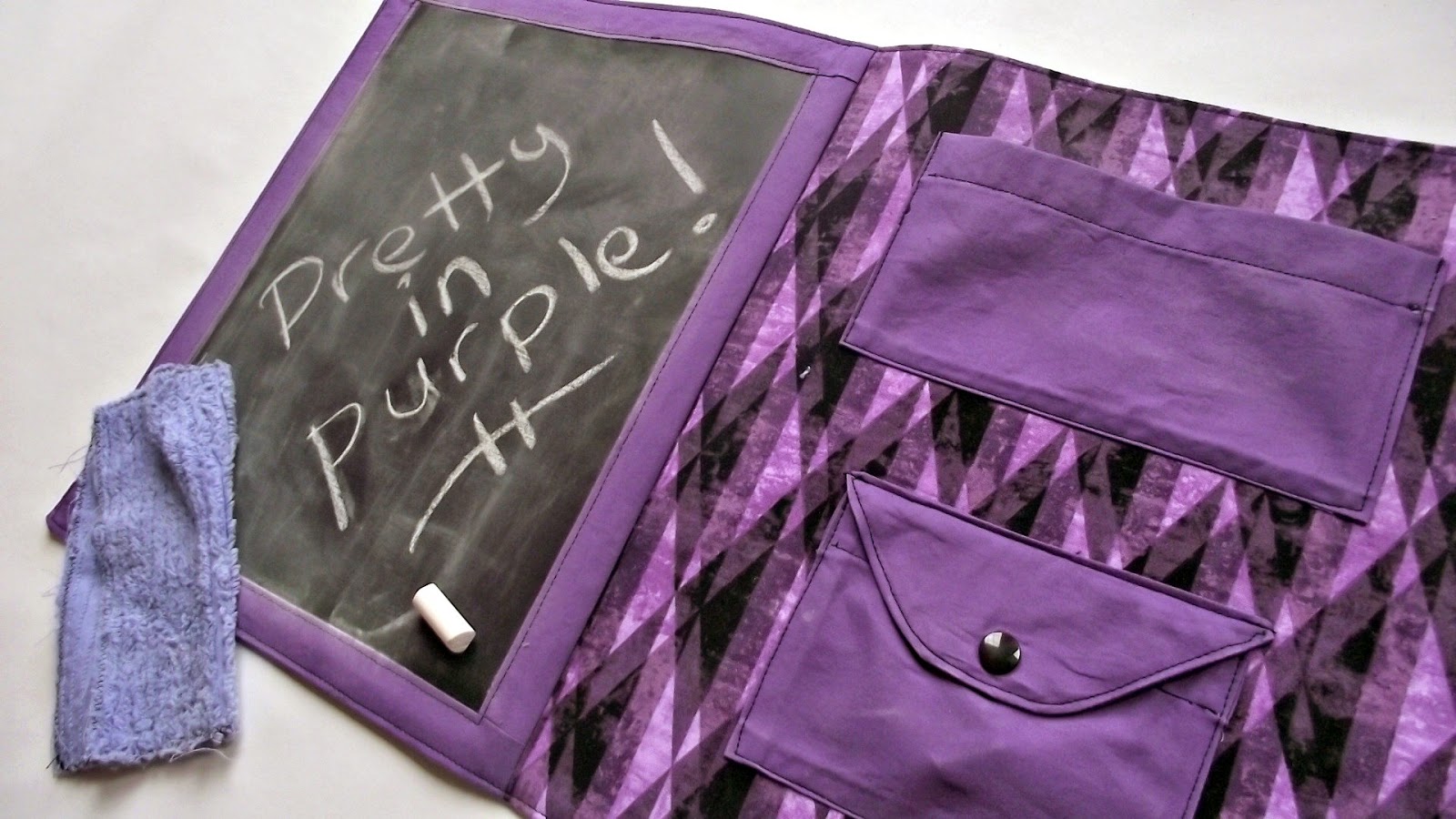 And we were all set to go. 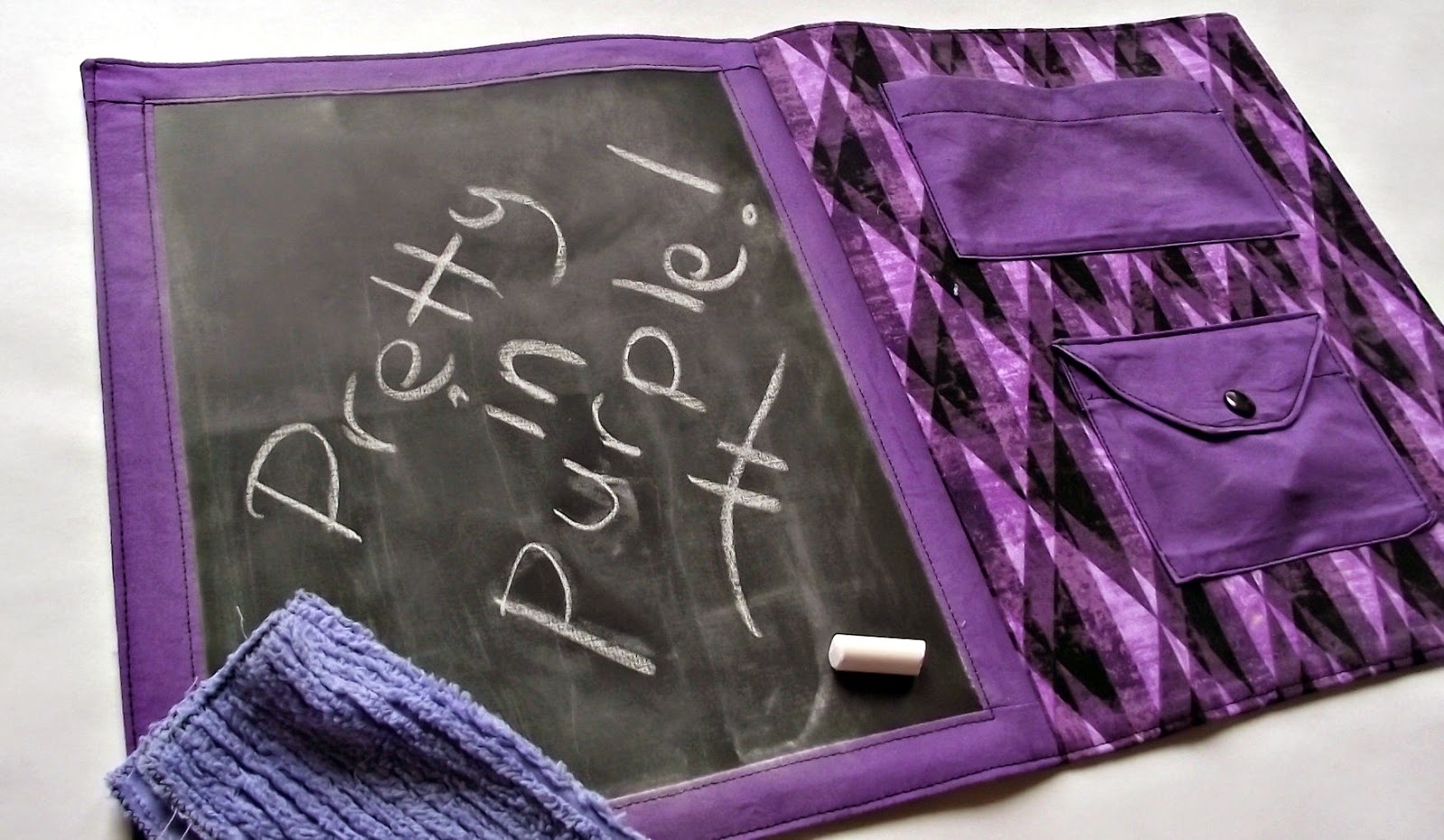 They definitely met with approval and had to be thoroughly tested out. 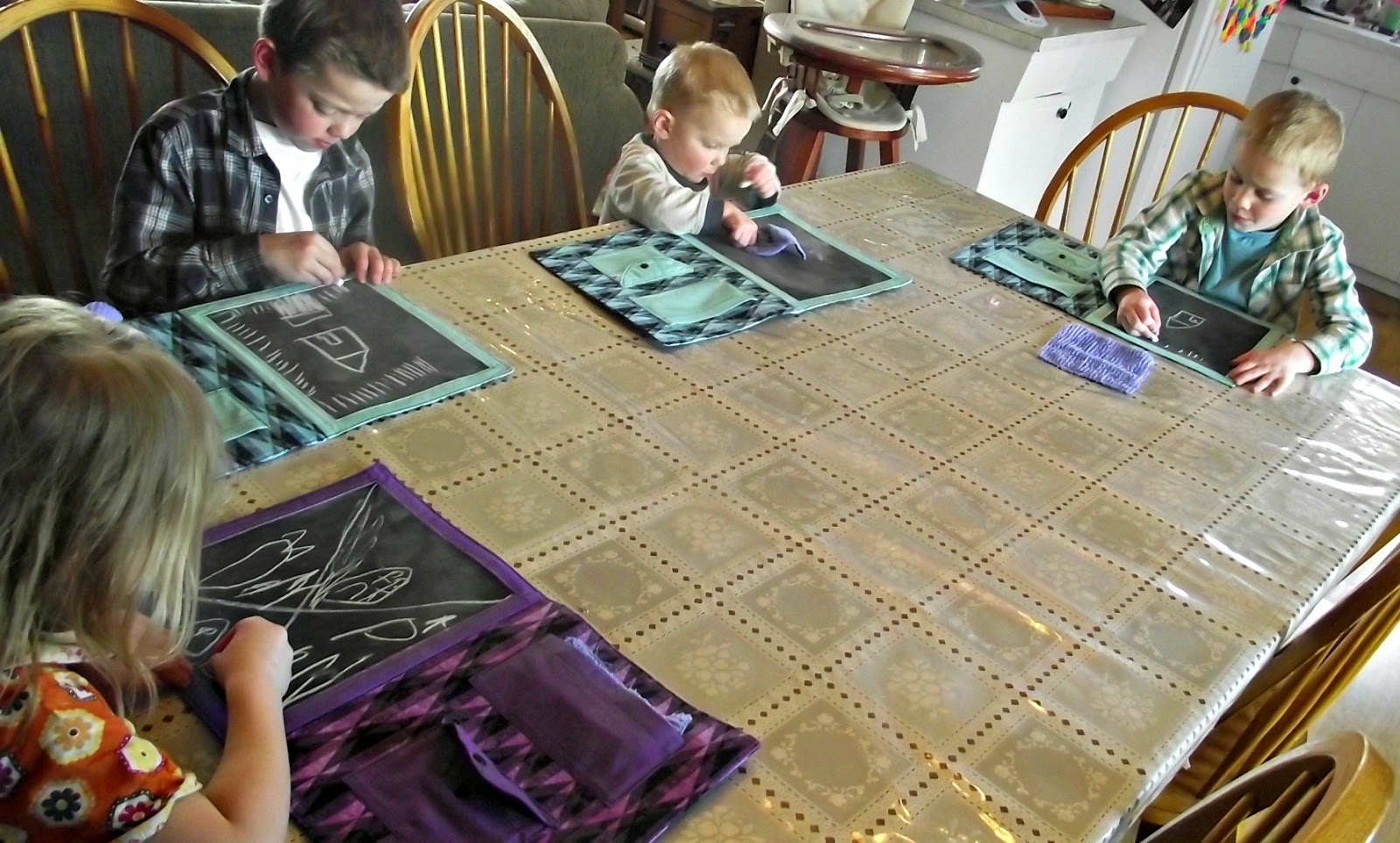 The chalkboard fabric is not listed at Canadian National Fabric anymore but it is still available by request if you contact her!
﻿
Posted by fenna at 1:03 PM 1 comment:

Friends of ours were recently married, so I thought I'd make the wedding gift. 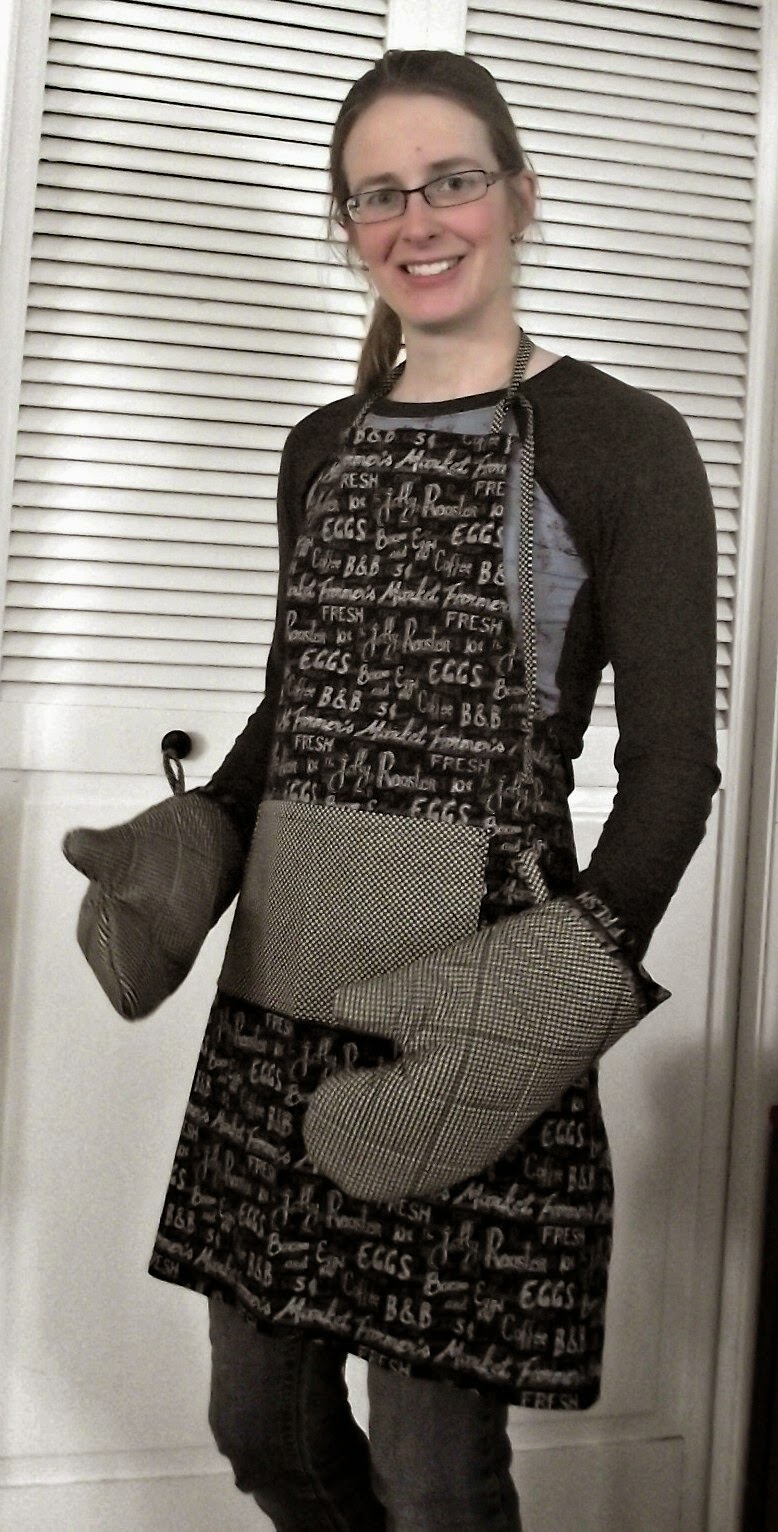 It's a pretty basic set, and it's the first time I used Insul-brite which I bought from Stay Home Fabrics.
The other fabrics are from Canadian National Fabrics.
They are from the Country Touch line.
For the apron pattern, I traced my apron and 'made' a pattern that way.
The oven mitts are a free pattern from YouCanMakeThis.com
A gift for myself was that my dishwasher was finally ripped out after never using it in over 7 years.
And, we put some shelving in to hide store the kids' crayons and coloring books, school books, and some other stuff.
A curtain was in order to keep things looking tidy.

Again I used some fabric from the Country Touch line.
It fits in quite good with my kitchen!