The Battle of the Serger

I've been involved in the Battle of the Serger.
I like the idea of a serger--really I do.
But, when the thread snaps every inch or two, when it makes holes in your fabric where your sewing machine would not, it is liable to drive someone crazy and declare full-out war.
Or, just go back to the sewing machine....
First up, a gift for a friend who received a little blessing--a baby boy!
The fabrics are organic cotton jersey knit in orange and Robert Kaufman jersey knit in hazelnut--both from Fabric.com.
The pattern is from Small Dream Factory--the Envelope Neck Long Sleeve.
Now, I just need to find myself some A4 paper to print off the bigger sizes!
I wasn't planning specifically to put those star appliques there.
That was an accident.
As in, the serger making holes in the fabric (after I had accidentally caught a piece of the front in the seam, even though it had not gone through the knives).
So, I had to be a little creative--after putting the neckband on and one whole sleeve on, I was so close to being done that to ditch it would be rather frustrating.
Out came by Wonder Under and my stencils and, voila!
Only one star was necessary, but 3 made it look less accidental than one lonesome star on the shoulder...
And, then the side seams....
I had started with the serger and was determined to finish with it, but I do not know how many times I had to rethread that thing.
Out came the owners manual.
And, I learned how to rethread the top threads.
I think I can do it by memory now. 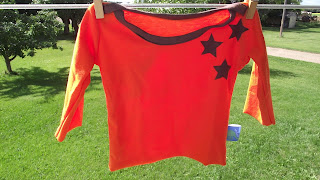 And, then.
My second son was telling me how his underwear had holes, how they were too small, etc.
"I need you to make me some, Mom."
Back to the serger I went, the next day. After serging three of them, having to rethread many times, I decided to finish on my sewing machine.
Enough is enough. 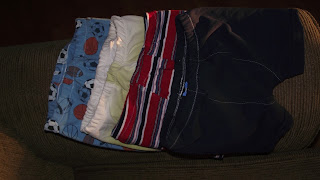 All the fabric for these are from shirts that were either stained, looked more like a PJ shirt (the ball one), and all were shirts I had received from a friend.
They now actually get some use.
And, the pattern is again from Apple Tree Boutique. 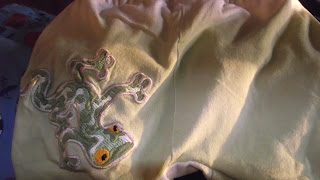 The ball one was claimed by my oldest. (Yes, I know--I was sewing for my second but he has much less need of underwear than my oldest.)
I'm still trying to decide how many I should give my second and if I should give my oldest one more.
The lizard one is claimed by my second.
And, I made sure that each of the boys got at least one with a tag that had a 'meat-eater' dinosaur on it (Tyrannosaurus). They are obsessed about 'meat-eaters.'
The tags are actually some ribbon I found at Walmart.
Finally, some boy ribbon! 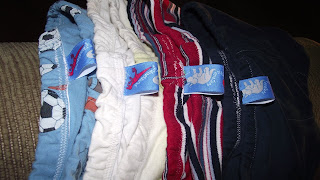 And, that is the Battle of the Serger.
We'll see when I want to open up those old battle wounds...
﻿
Posted by fenna at 9:47 PM