So, I finished it. Actually, it'd be more honest to say that I finally started and finished it. Yes, I procrastinated until I realized that it was almost the end of June. Time goes by so fast!
But, without further ado, I present to you, the Henry Shirt: 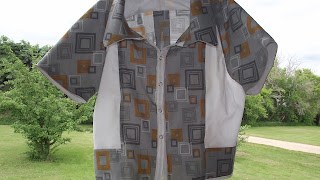 It was a lot of fun to sew--first time I did a collared shirt, and first time I actually made a button up shirt. And, the yoke was pretty neat as well. (I had wondered while cutting the pattern pieces why the sleeve pieces were so big, and then wondered what is a yoke?! Ha, yes it was a learning experience for me!) The fabrics are: the grey: a repurposed pillowcase that is a mix of cotton and polyester, and the white: a cotton from Walmart. 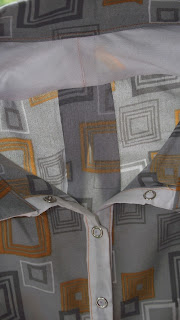 The front has snaps instead of buttons. I was tempted to add buttons instead, but I wanted to be done and button holes can take so long. So, I went with what the book (Sewing for Boys) suggested: snaps. You can see the inside yoke as well--I was pretty happy with it, considering it was a first-time attempt. I did have to seam rip a bunch at one point because I realized that I had sewn the side pieces to the wrong side of the front pieces. Too much of a hurry I suppose. And, I had to really think, what is the bottom of the collar as I had never made a collar before. 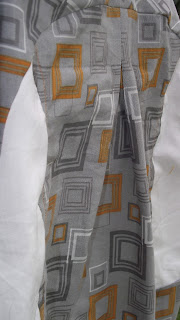 The box pleat on the back adds a good little detail.
There is one thing I would definitely change if I were to make it again. I would buy a lighter weight interfacing. I used one that is actually a bit too heavy and you can tell with the collar. Next time better! 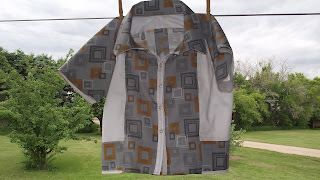 And, I'm linking up to Boy Oh Boy Oh Boy Crafts with their Sew-along! 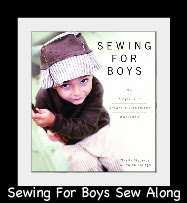 Email ThisBlogThis!Share to TwitterShare to FacebookShare to Pinterest
Labels: sewing, sewing for boys